Potato chips, much like the popsicle stick, was widely known to be invented by accident. A chef named George Crum invented the snacks back in 1853 in Saratoga Spring, New York. An angry customer decided he didn’t like the french-fried potatoes Crum had made and chucked the stuff back in the kitchen for being too thick for his taste.

Also angered by this, Crum decided to cut the potatoes extremely thin and served it back to the table. Little did Crum know that the customer and many others loved it. The popularity of the potato chips skyrocketed around the nation, with Van de Camp’s Saratoga Chips opening in Los Angeles in 1915.

Chips were also prepared at home and were sent to restaurants, stores, and the streets for selling.

Emergence in the Mainstream

Mainstream production of these snacks started in 1925, with the invention of the automatic peeling machine. Laura Scudder’s company eventually ironed sheets of paper and turned them into bags, placed the chips inside, and sealed them shut.

Years later, in 1942, the American government declared potato chips as an essential food item, allowing producers and factories to continue operating during the war. It was also during this time that the chips started being enjoyed with dips.

Today, potato chips constitute 40% of snack consumption in the US, ahead of snacks like popcorn and pretzels. Over time, potato chips have developed a reputation for not being the most nutritious food around, so manufacturers started creating and marketing low-fat options in the 1990s. 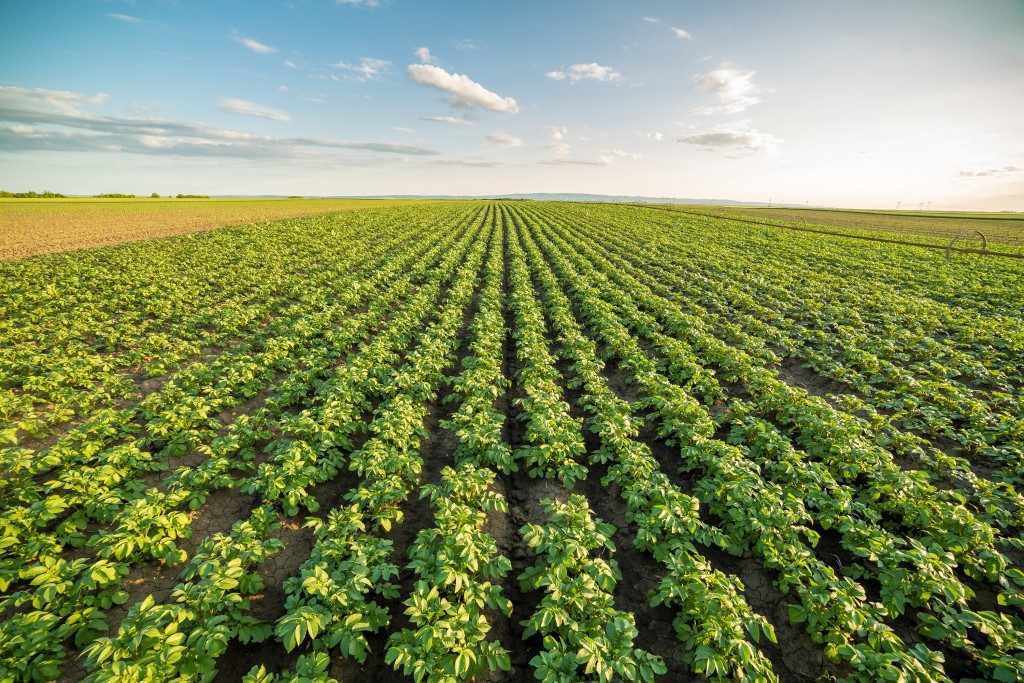 Unlike potato chips in the early years, today’s potato chips are made from fresh potatoes delivered to manufacturing plants, with sources varying from season to season and from different states such as Florida, Carolina and the Dakotas providing the majority of the supply.

Potatoes are evaluated by their type and size, with around 100 pounds of potatoes needed to create a 25-pound bag of chips. The approved potatoes are then fried in vegetable or corn oils and is passed through a filtration system, leading to being treated by phosphoric, calcium chloride, or citric acid in reducing sugar levels.

Manufacturers then design the bags they are placed in and are stored into rolls leading to the assembly line.

Upon arrival, potatoes are examined for any blemishes such as green edges and are taste-tested for quality, with rejected potatoes placed aside. The approved potatoes are transferred through a chain, belt, or tabletop conveyors, leading to a belt that allows stones to fall off.

The cleaned potatoes are then transferred to an automatic peeler and are washed with cold water. The potatoes then pass through a presser that slices them to thin slices, measuring about 1.7 – 1.85 mm in thickness.

After the slicing process, the soon to be chips are washed with water to remove additional starch from the slicing. Other manufacturers may decide to retain the starch for a more natural chip. What follows is the coloring treatment of the chips that enhances their color.

Moving along, the chips pass through air jets to remove unwanted water and are fried in troughs with oil at around 350 F (176 C). The chips are reinforced by paddles, with flavored chips passing through powdered flavors and seasonings.

After this process, the chips are cooled, with excess oil drained and is sorted by removing burnt chips. The chips are now ready for packaging and undergo a metal detector to detect any foreign objects from the manufacturing process or within the chips.

The bags are then rolled down, with chips being placed based on an approximate number while preventing an overabundance of air inside the bag. The bags are then conveyed and put into cartons, ready for shipment.

What the Future Holds

Potato chips production shows no signs of slowing down, but the demand for low-fat choices led manufacturers to produce low-calorie options while not sacrificing the overall quality and taste of the chips.

Nowadays, technicians are working on making a crunchier chip, as well as placing more work on genetically modified potatoes having less sugar.